Despite a minor decrease in the proportion of overdue B2B invoices, 70.9% of respondents in Taiwan reported that their companies have been negatively affected by overdues. Changes in the average payment terms and payment delays brought an increase in Taiwan’s average payment duration which is the second highest in the region. B2B receivables have been written off as uncollectable mostly because of insufficient availability of funds and the old age of the debt.

Convenience – a top reason for selling on credit

When asked about the main reasons for selling on credit to their domestic B2B customers, respondents in Taiwan mentioned convenience and trustworthy customers with whom they have long-term business relationships. Credit sales are perceived as a good way to expand business while at the same time increase the customer’s trust. According to the survey findings, respondents are most likely to not offer credit because of the poor payment behaviour of their domestic B2B customers and due to a lack of information on the customer’s business or payment performance (each reason cited by 66.7% of respondents).

We trade on credit because it is more convenient and improves work efficiency.

Convenience is also one of the top reasons mentioned by Taiwanese respondents in regards to their foreign B2B customers. However, credit seems to be offered to foreign customers most often to develop business on the international market. The main reasons for refusing to grant credit to foreign B2B customers are high economic or political risk in the customer’s country (mentioned by 50% of respondents) and a lack of information on the customer’s business or payment performance (37.5%).

We trade on credit to ensure long-term cooperation and to expand our market share.

A steep increase in average DSO in Taiwan

In 2018, the average frequency of late payment has declined slightly in Taiwan. Despite minor improvements every year starting with 2016, the majority of respondents, 86.1%, have reported late payments by their domestic and foreign B2B customers.

Based on the survey findings, there was also a minor decrease in the proportion of overdue B2B invoices in Taiwan; from an average of 45.0% in 2017 to 42.1% this year. This occurred mainly because of a drop of almost five percentage points in foreign past due B2B invoices.

The average Days Sales Outstanding (DSO) figure in Taiwan increased by six days in 2018 and stands at 48 days. Among the Asia Pacific countries surveyed, Taiwan recorded the second highest DSO figure after that of India (52 days). Asked about expected changes in their company’s DSO over the coming 12 months, 47.9% of respondents said that they expect it to remain stable, 24.7% that they expect a slight increase and 18.4% that they foresee a slight decrease.

Taiwan is one of the countries more likely to differentiate payment terms between domestic and foreign B2B customers. 47% of respondents said that they would give their domestic B2B customers a shorter time to fulfil their payment obligations. Reasons for differentiating payment terms in Taiwan are internal policies, industry practices and the financial risk related to the export transaction. 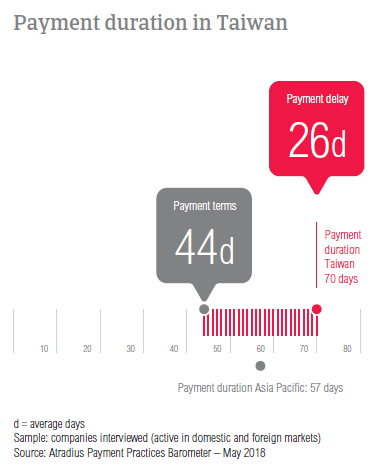 52.9% of respondents in Taiwan said that foreign B2B customers delayed payments most often because of the complexity of the payment procedure. While this was also the main reason for foreign payment delays in the region, the percentage of respondents who stated this in Taiwan is way above the regional average and the highest for the region. The second most frequently mentioned reason for payment delays by customers abroad was disputes over the quality of goods delivered and services provided, cited by 49.4% of respondents – again the highest percentage in the region.

Based on the changes in average payment terms and payment delays, the average payment duration in Taiwan increased from 68 days in 2017 to 70 days this year. This means that respondents in the country need a longer time to convert B2B invoices into cash, almost two weeks longer than the average for the region.

E-invoice effective but no noteworthy effect on payment duration 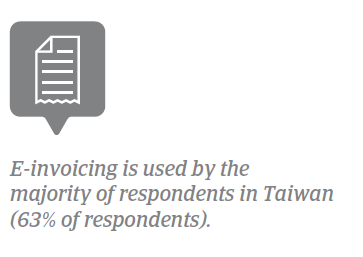 Of the respondents already using e-invoicing, 58% said that after invoicing their B2B customers electronically, they received payments on their B2B invoices quicker. For a notable 37% of respondents online invoices did not have a noteworthy effect on payment while 5% of respondents noticed a slowdown in payment.

A negative effect of up to 10%

65% of respondents in Taiwan expect the global economic situation – more specifically, protectionist measures – to impact their business over the coming 12 months. A low 4% of respondents – probably focusing primarily on domestic B2B sales – expect to see improvements based on the changes occurring around the world.

Like most of their peers in Asia Pacific, respondents in Taiwan stated that global protectionist measures will most likely have an effect on their company’s turnover. When asked about the magnitude of the impact, 25% of Taiwanese respondents said that they believe it will have as much as a 10% negative impact. For 18% the negative effect is expected to be somewhere between 20% and 30%, while 10% of respondents expect to see a negative impact of up to 30%.

Uncollectable receivables in Taiwan originated most often from B2B customers in these sectors: electronics, services, business services and consumer durables. The main reasons for writing off B2B receivables as uncollectable are the customer going bankrupt or out of business (reported by 52.7% of respondents) and the old age of the debt (cited by 40.2% of respondents). 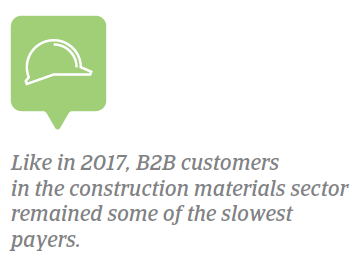 Growing competition from mainland China in the electronics sector require productivity increases and a diversification of the economy in the long-term.

Asia Pacific: an increase in payment duration in 2018

Despite minor improvements, the impact of late payments cannot be denied and businesses in Asia Pacific need more time to convert B2B invoices into cash.