GDP growth is expected to remain at a level of about 6% in 2017, but growing political uncertainty could hamper business sentiment and foreign investment. 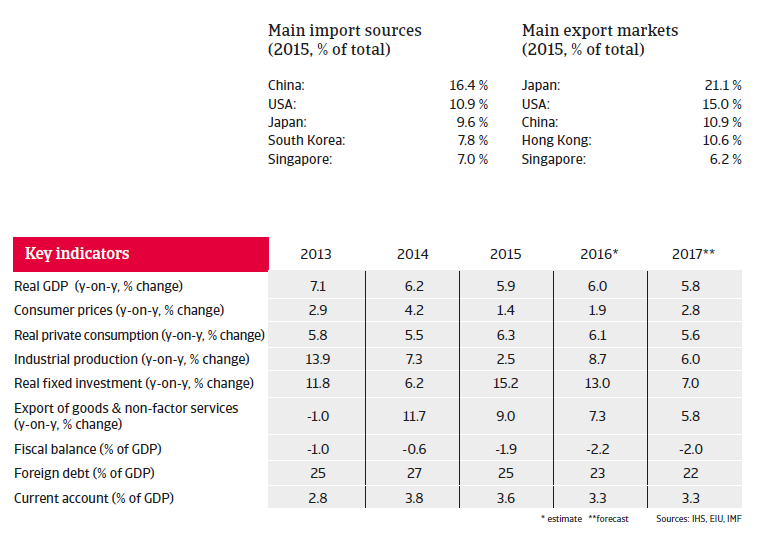 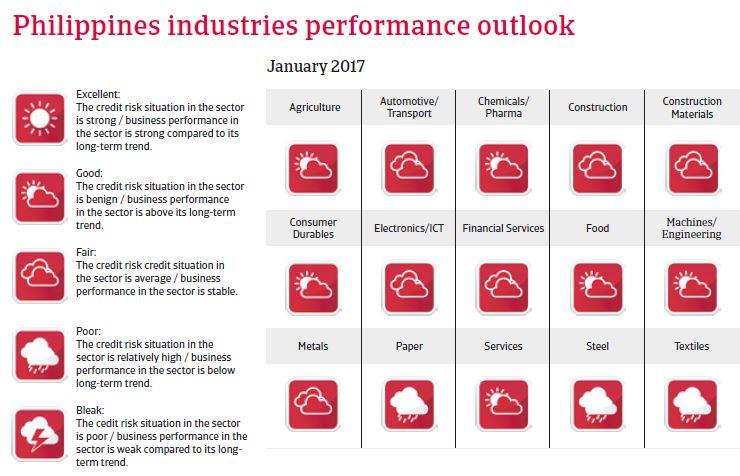 Government type: Presidential republic. The Philippines' constitution is strongly inspired by the US constitution.

Strained relationship with the US

President Duterte´s violent crackdown on drug trade, which has led to the extrajudicial killing of nearly 6,000 people, has raised major international concerns. Duterte countered US criticism of his anti-drug policy with public proclamations to end the close security cooperation with the US. At the same time Duterte tries to improve the relationship with China, which has until recently been strained due to overlapping claims in the South China Sea. 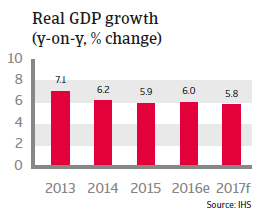 Since 2012, economic growth has been persistently high, driven mainly by private consumption, which accounts for about 70% of the economy. Growth has also been sustained by rising demand for Philippine exports such as electronics. Foreign direct investment tripled between 2009 and 2015.

Growth is expected to remain at a level of about 6% in 2017, on the back of increasing government spending (infrastructure projects) and private consumption, which is sustained by low oil prices, decreasing unemployment and the continuing inflow of remittances. A growing middle-class is expected to sustain robust private consumption growth over the next couple of years. 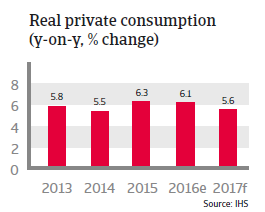 The Duterte administration is promoting infrastructure projects and is focused on empowering merchandise competitiveness. Indeed, rail networks, ports, roads and airport developments are necessary in order to safeguard high economic growth rates in the long term. Business investments and exports are contributing to GDP growth as well. Given that the US and Japan are major export destinations, the Philippines is less affected by lower demand from China than many of its Southeast Asian peers.

The fiscal deficit remains at an acceptable level and public finances are healthy, supporting continued government spending. The external macroeconomic situation is robust, with manageable foreign debt (22% of GDP; 62% of exports of goods and services expected in 2017) and ample liquidity. Despite trade deficits, the current accounts are structurally positive due to the inflow of remittances from overseas workers and rising services exports. External financing requirements are low and international reserves amount to more than 15 months of import cover. 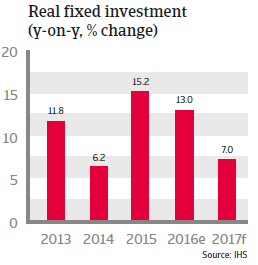 Despite robust domestic demand, the Philippines´ economic expansion is still hampered by a difficult business environment, with corruption and poor infrastructure impeding investments.

At the same time President Duterte´s violent campaign against drug trade has raised doubts among international investors about the government´s commitment to the rule of law. Further uncertainty has been triggered by Duterte´s anti-US remarks in public and signs of trying to strengthen the Philippines’ ties with China at the expense of its close political and economic cooperation with the US. Such movements could be a risk for the Philippines’ otherwise benign economic outlook by hampering business sentiment, trade and foreign investment.

Developments in the US related to the election of Donald Trump and its expected effect on the US monetary policy path and international trade introduce significant uncertainty for EMEs in 2017.

Nearly 90% of the survey respondents in Asia Pacific reported having experienced late payment of invoices from their B2B customers over the past year.