Beside deterioration of payment behaviour in the private sector, the number of payment delays in larger projects dependent on government funding is still high. 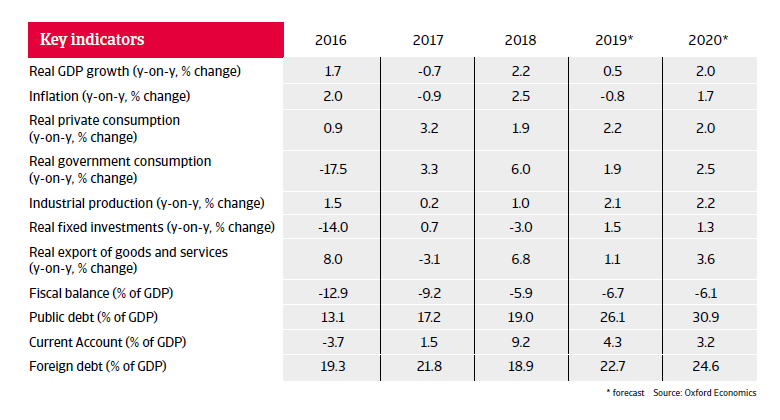 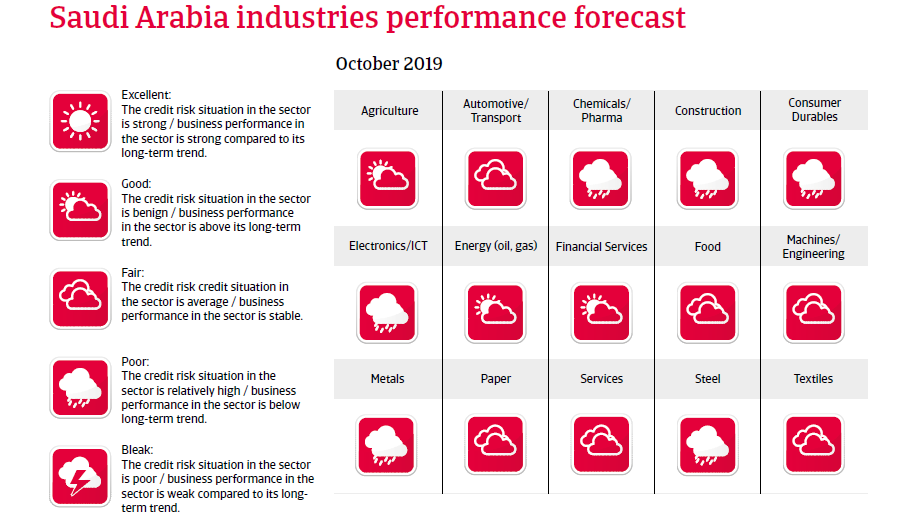 Crown Prince Mohammed bin Salman remains the main driver of an ambitious reform program (“Saudi Vision 2030”) to diversify the economy away from oil and to boost the private sector. This step is important, as the oil sector is not generating enough jobs to absorb population and workforce growth, which could lead to rising dissatisfaction and social tensions. The Crown Prince´s grip on power remains firm, with the risk of opposition from senior members of the royal family being rather low. In contrast to economic reform efforts, reforms towards more political rights and participation remain largely off the agenda.

Saudi Arabia feels challenged by grown regional influence of Iran, its traditional rival for hegemony in the Gulf region. Therefore, Saudi foreign policy has turned to become more assertive, mainly in order to counter Iranian influence, e.g. by supporting opposition (Sunni) forces in Syria and, since March 2015, by a direct military intervention in Yemen against the Houthi rebels, who as a Shia tribe are allegedly backed by Iran. In September 2019, a drone/missile attack on Saudi Arabian oil facilities led to a serious short-term disruption of oil production. While the Houthis claimed responsibility, both Saudia Arabia and the US accuse Iran to be responsible for the strikes, which has considerably raised tensions in the region.

After a recession in 2017, the Saudi economy has rebounded modestly. However, the annual growth rates forecast for 2019 and 2020 are much lower than the 4% average expansion in the period 2006-2016. An extension of OPEC production cuts restrains the short-term growth prospects of Saudi Arabia’s still oil reliant economy.

Large investments in infrastructure as part of the “Saudi Vision 2030” economic diversification program should support economic activity in the coming years. Higher public spending aims at supporting non-oil related activity in services and manufacturing. The second phase of a four-year private sector stimulus plan was launched in November 2018, with large investments pledged to housing, tourism, transportation, power and education projects.

However, private businesses are still feeling the pinch from the recent oil price slump and subsequent austerity measures (new taxes, subsidy cuts, rising utility costs and levies on expatriates), that negatively impacted domestic demand. Another issue affecting domestic consumption is the ongoing expatriate departure (more than 1.3 million expatriates, 10% of the total foreign workforce, have left the country since Q4 of 2016).

For Saudi businesses, the weaker purchasing power and demand situation have impacted turnover growth across many sectors, while rising costs and taxes have weighed on corporate profitability and squeezed margins. The volatility of oil prices and strained government finances also put pressure on liquidity.

All this has led to a notable increase in non-payment notifications in 2018, which has continued in 2019. Beside deterioration of payment behaviour in the private sector, the number of payment delays in larger projects that are directly or indirectly dependent on government funding is still high. Mainly construction (contractors and subcontractors) and pharmaceutical distributors are affected by public payment delays.

Austerity measures helped to reduce the budget deficit from 13% of GDP in 2016 to 6% of GDP in 2018. Going forward fiscal adjustment will be more gradual, as the focus has shifted to support short-term growth. Previously cut allowances for civil servants have been restored, capital spending for projects has been resumed and social transfers to compensate poor households will increase again (in order to avoid public discontent). Therefore, the target to achieve a balanced budget has been pushed back, from 2020 to 2023, which is no issue due to ample financial buffers.

The financial buffers of Saudi-Arabia are still large enough to easily cover the external financing requirements and defend the exchange rate peg with the US dollar. The recent interest rate cut by the US Federal Reserve that ended the US monetary tightening cycle has mitigated the risk of capital outflows and contains borrowing costs for Saudi Arabia, as no further interest rate hikes are required to maintain the interest rate differential. Moreover, the current account deficit is back in surplus since 2017, limiting the drain on reserves, and external debt is low.

Access to international capital markets remains easy, and there is still a plan to transform the Public Investment Fund into a USD 2 trillion Sovereign Wealth Fund (SWF) in order to increase investments abroad. The SWF will be partly financed by the sale of a 5% stake in the state oil company Aramco.

In 2016 the government announced far-reaching reform goals in its “Saudi Vision 2030” plan. The aim is to transform the economy over the next 15 years by diversifying growth, reducing the dependence on oil, assuring the long-term sustainability of public finances, increasing the role of the private sector and creating more jobs.

However, it remains to be seen if the political willingness to implement those far-reaching economic reforms will persist. In any case it is expected that diversification will proceed only slowly, leaving the economy largely dependent on oil revenues and state support for the time being.

Many obstacles remain. For instance, plans to increase the consumption share of locally produced goods to 50% by 2020 could prove difficult without appropriate economic policies to foster external competitiveness. The Saudization scheme to replace cheaper foreign workers with Saudi nationals is hampered by rigid labour laws and skill mismatches. Currently Saudi nationals occupy 90% of jobs in the public sector, but only 19% in the private sector. The latter is struggling with the mass departure of expats since end of 2016, as Saudi nationals have so far proven unwilling to pick up the slack. 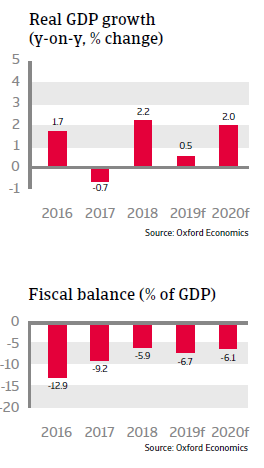 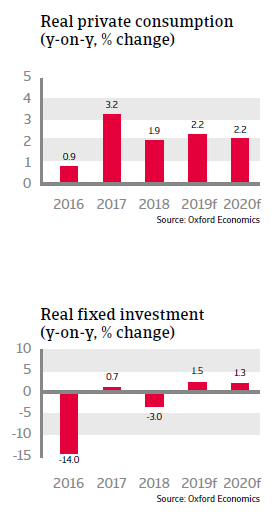 In 2019 and 2020 growth is expected to exceed 5%, supported by exchange rate liberalization, interest rate normalisation and increasing tourist arrivals.

The economy is currently forecast to expand by about 3.5% in 2020, however, this depends on decent performance in agriculture, tourism, and exports.

Despite a modest economic rebound the business performance and credit risk situation of several industries remains strained, especially in Dubai.